A few weeks ago when we were Christmas shopping, my wife and I bought the book Weird Ohio, which had a lot of interesting stories about strange places in Ohio. We bought the book because we just plan on traveling around Ohio for our family vacation next year, and this would give us some more ideas on what to see. I was reading through the book and saw a lot of interesting places not far from Akron, including the Chippewa Lake Amusement Park.

I had heard of this abandoned amusement park before, but never had the chance to go see it. So, I mentally marked that as someplace I'd like to go see and then forgot about it.

Then, yesterday I read an article about five modern abandoned cities, and that made me think of the Chippewa Lake Amusement Park again. So, I decided to do a little more research on the park. I found out that the land has been sold to developers who plan on turning it into an 80-acre development called Chippewa Landing. So, I though that I better go visit the area before the wrecking crews get to it.

I wasn't sure what to expect, but most accounts said that it was possible to see some of the old rides from outside the fence. And, I wanted to take some pictures, but I didn't wanted to get busted for trespassing, so this sounded promising. 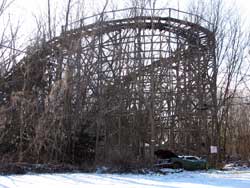 My oldest son and I made the half hour drive over to Medina county and started to look for the park entrance. Right off of Lake Road in Chippewa Lake we saw a street that was divided by a small concrete median with an old block sign frame on it, this was Main Street. We had a feeling that was the right road, so we turned down it. Next, we spotted some old street lights on the side of the road that looked liked the belonged at an amusement park, so we knew we must be close. Then, right in front off us we saw the roller coaster. It was locked behind the gates of a chain link fence with what seemed like hundreds of no trespassing signs. We respected the signs and just stood outside of the gates and took some pictures.

As we moved down the fence looking for a better angle to take photographs we started noticing the numerous holes in the fence. We were tempted to walk inside and take a look around, but decided better of it.

After checking out the main entrance, we decided to drive down some other nearby streets that seemed to dead end into the park property. On the next street over we were presented with a view of the rest of the roller coaster we had seen at the main entrance. It was quite impressive to see such a great structure rotting in the woods. It is hard to make out in the picture at the top of the post, but the curving vertical line is the tree entangled roller coaster.

I had seen some interesting photos of this old park on the internet, like ones of the old Ferris wheel, but those areas were not visible from outside the fence. It would be nice to be able to get some photographs of some of these rusting relics before the land is cleared, but I doubt that the owners would be willing to take the risk of having people walking around the decaying structures.

If you are interested in old curiosities like this, then I suggest you swing by and take a look before they tear the old place down.
Published: 2008-12-21
BloggerBooksAbandonedTravelHistory