This weekend I was planning for my next batch of Odinzale, and I decided that I would check the iPhone app store again for a good brewing application. As luck would have it I found two.

The first application I found is called Brew Pal (iTunes). This application has a ton of features, most importantly is the ability to create recipes. It allows you to enter all your grains, hops, yeast, and other adjuncts and then it automatically calculates gravities, color, bitterness, and more. Each item type is on a sepperate screen, and it does not allow you to add your own ingredients. While the list is fairly comprehensive, I couldn’t add Honey in a way that impact the original gravity.

Brew Pal also has many useful brewing tools, such as carbonation table, flavor estimator, color estimator, hydrometer calculator, and refractometer calculator. And, the tool that I liked the most, the beer style guides. It also has brewing timers and a feature to email recipe information as a very nicely formatted email. Though the email function is clunky. You must enter your email address into the setup area, and then the email is mailed to you from someplace outside of your iPhone or iPod.

But, I found the interface to be gimmicky and prone to many small glitches. Sometimes the list items would have icons for deleting, and other times they wouldn’t. The list themselves also acted strangely sometimes. Even though I wasn’t crazy about the interface, the tools that it made available made me feel as if my $.99 wasn’t wasted. 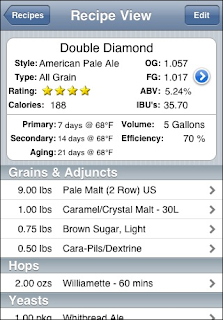 The second application that I found is called iBrewMaster (iTunes). The first thing that I noticed was that iBrewMaster’s interface appears to be much more “standard”, and just less clunky. The next difference I noticed was the efficiency of the workflow.

Though the basic concept is the same, the operation of iBrewMaster is a little different than that of Brew Pal. With iBrewMaster you either choose one of the pre-loaded recipes (pictured on the right) or enter your own recipe and then create batches. I like the ability to track the recipe batch from beginning to end, and it would be especially helpful for those that might have multiple batches at various stages.

I started by adding my recipe for imitation Christmas Ale, and I found the interface to be much more streamlined and intuitive than that of Brew Pal. There is a list of all your recipes, and when you wish to add another you click edit and then add a recipe. On the edit screen you can easily change the header information and add, modify or delete components of the recipe. The developer, Joe Cannici, managed to cram a lot of information and editing ability into a small area. It helps you see the complete recipe very quickly

iBreMaster also comes pre-loaded with many grains, hops, and yeast types, but it also allows you to add your own.

There were two downsides to iBrewMaster. First, I could not find an easy way to share my recipe. It would be nice if there was a button to dump the recipe into a draft email right on my iPhone. Secondly, it did not estimate the color. When I first started brewing I tended to create brews that were much darker than I intended, and I have since become very good at double checking the color estimate with a pencil and paper. But, it would be nice to have it automatically calculated for me (it could be place, right under the efficiency, that seems to be the only blank spot on the recipe screen).

(see the update below)

At $4.99 iBrewMaster is a bit more expensive than Brew Pal, but the difference is worth it to me. For managing recipes and tracking batches, I highly recommend iBrewMaster. But, since it is only $.99, I also recommend Brew Pal for the multitude of tools that it offers.

Update, 2009-08-04: A developer from iBrewMaster recently saw this post and contacted me about it. He informed me that future versions of the application will resolve some minor bugs, add automatic color calculations, and also offer some sort of email functionality. If I heard right, it sounded like he expected these features to be available sometime in late September, just in time for fall brewing. That will make this a solid 5 star app in my book.

Tim Joachim
Thanks. This is helpful.
Anonymous
Thanks for the review. I bought both and am reading recipes to get ideas. I'm new to brewing, so I'm thankful that you took the time to review these.
Published: 2009-08-02
BloggeriPhoneSoftwareBrewing