Today my wife pointed out that she was not able to use the Job Comparator, my new tool for comparing earnings, without logging in. And, I said that was because you have to be logged in to save data. And, she replied, “why can’t you just disable saving when I’m not logged in”. What a brilliant idea. So, I have updated the application to allow people to use make job comparisons anonymously, then if they would like to save their data they must log in.

But, what happened to version 2? Well, there was just a little user interface imperfection in my first upload, and that was fixed in version 2. So, now, it is at version 3.

A while back I received a call out of the blue from a recruiter, he had a position that he felt would be perfect for my skill set and wanted to know if I was interested. I am always interested in hearing about new opportunities, so I told him to tell me about the position. We talked about the details for a while before getting down to the most important piece of data, the salary. The position paid more than my current job, but it was also in Cleveland, which means a much longer drive in the winter. I needed a way to see if the increase in pay was going to offset the additional time and expense of driving to downtown Cleveland.

Many years ago I wrote a program using Delphi (Pascal) that would do this sort of thing, but that was long gone. So, I started to create an Excel spreadsheet, which worked well. But, I thought that this would be better as a web based application. I had been toying around with the Google App Engine since it came out, but never really finished anything worth publishing, and I thought that this would be a perfect opportunity to finally dive into cloud computing.

We had a problem where our OnBase COLD processing PC was importing text documents as one page. In the document viewer, OnBase would show the logical page break (a blue line), but when it printed only one page would come out. If I right-click on the document and select properties, towards the bottom is the document statistics which showed only one page.

I called support and they directed me to edit the onbase.ini (Start>Run>onbase.ini) and had me change “SetPageToZero=0” to “SetPageToZero=1”. Then I need to restart the COLD processor, this forces the import to evaluate how many pages are actually there.

(If my calculations are correct, the Great Lakes Brewing Company’s Christmas Ale has 242 calories per 12 fluid ounces. I have noticed that quite a few people are coming to this page in search of that information, so I performed some calculations to estimate the number of calories in Christmas Ale.)

Every beer loving person in Northeastern Ohio loves the Great Lakes Brewing Company’s Christmas Ale, myself included. But, as I said before, the price for a six-pack this year is up to a whopping $11. Don’t get me wrong, the craftsmanship and taste make it worth the price, but the recession is forcing me to be a little more frugal this year. So, being an amateur brewer, I decided that I should attempt to emulate this great beer. You can be sure that I will still have Christmas Ale in the refrigerator this holiday season, but there will be less there and it will be sharing shelf space with my homebrew.

Time for Some More Homebrew 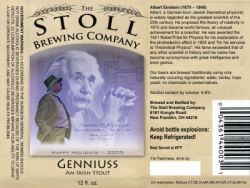 I was bottling up some 2007 mead (honey wine) recently, when I realized that it has been quite a while since I have made a full batch of homebrew. I checked, and the last full sized batch I made was the Holiday Genniuss (an Irish stout) from 2005.

Normally, at this time of year I would be getting my fill of the Great Lake Brewing Company’s Christmas Ale. But, this year a six pack costs about $11, and with the recession in full swing I feel less inclined to splurge as much. I’m sure I will still purchase my fair share of Christmas Ale, but it will definitely be less than usual.

An urgent message to GM suppliers

Because our futures are linked, I want you to know that General Motors is doing everything possible to deal with the impact the financial crisis is having on the domestic auto industry. Yet despite our successful efforts to restructure, reduce costs and enhance liquidity, we are facing an uphill battle with the current administration and Congress in securing a bridge loan.

That’s why we need your help now. Simply put, we need you to join us to let Congress know that a bridge loan to help U.S. automakers also helps strengthen the U.S. economy and preserve millions of American jobs.

Everyone knows that the economic conditions in the US are tough right now, and there are indications that conditions will further degrade before eventually improving. Most people and business have already adjusted their spending habits in order to ride out the economic storm. But, for some industries, just implementing the easy cost savings ideas may not be enough for them to make it through. I work for a company that relies heavily on the big US automakers. And, I conceive that even if the government rides in with bags of money for our sector, there will still be weak companies which will fail.

Will my company be one that fails? It’s hard to say. We are a private company, so the books are closed. There is no way to truly know what the company’s financial health is. But, since I rely on my income from this business, it is in my best interest to give every effort towards ensuring that the company does make it through. To that end, I have brainstormed ideas for cutting costs in IT (information technologies), and I have forwarded these on to our North American CIO. However, the headquarters for our company is in Germany and that is where the real technology decisions are made. And, they are generally less receptive to ideas that originate outside of Germany, especially when those ideas run counter to their existing strategy. I am afraid that the strategy, designed in good economic times, will only be modified once pain from the economic crisis increases in our sector. At that time it may be to late to implement these drastic ideas.

At work we are getting ready to bring one of our facilities into our global standard EDI system. I am not on the EDI team, but as a member of the Application Operations group I manage the rest of their system. This is a big first step for this facility. We will remove their old, ungainly EDI system with it’s maze of scripts and put them on a streamlined, reliable system. But, until we can get them into SAP they will still have an old VMS based ERP system, and on OnBase system that does all the things that their old ERP system can’t do.