Wolfenstein for the iPhone

Yesterday I mentioned purchasing Flight Control for the iPhone, well I also downloaded another great game last weekend. You may have heard of this game before, especially if you are in my age group, it's called Wolfenstein 3D. 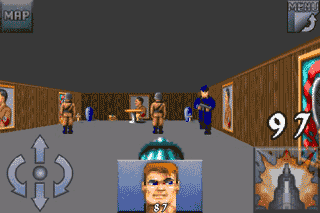 Wolfenstein 3D was the original first person shooter game released in the early 1990's for MS-DOS PCs. This was one of the first PC games that I wasted an untold number of hours on, eventually defeating Hitler and winning the game. My friends and I, being the nerds that we were, went so far as to create and trade custom levels for this game. And now, we can play it on a mobile phone, it's crazy how far things have come.
The iPhone version of the game takes advantage of the tilt sensor for maneuvering B.J. Blazkowicz around the labyrinths, but it takes some getting used to. It is nice that the game offers you choices on how you want the controls to be displayed, there even seems to be a configuration for lefties.
The one small issue that I have is the orientation of the screen. Most games that I have played on the iPhone that are designed for landscape play (as well as the YouTube app) rotate the display counterclockwise. In other words, the bottom of the phone is in the right hand. Wolfenstein rotates clockwise so that the bottom of the phone is in the left hand. Maybe there is a reason for this, and it is only a minor complaint, but it goes against my user interface expectations.
Despite my small complaints about the interface, I am happy with the game, and don't regret sepending the $5.
While I am on the subject of games from my youth, I thought that I would mention that I also enjoy SimCity on the iPhone, that was another game that I spent too many hours playing. I originally downloaded it from the App Store in December, but I didn't do a write up on it because I experienced problems once cities became too large. EA released an upgrade this week that seems to have resolved those issues.
It's nice to see great games from my childhood being revitalised.
Published: 2009-04-01
BloggerGamesiPhoneSoftware