I know that Windows 7 will be available for retail sale in a few days, but my company is still using Window XP. And, unfrotunately, many people are still limiting themseleves to skills that they learned with Windows 95 and NT.

We have countless people who use the Windows desktop as their main storage location. The desktop is where they store documents, links and even small programs. The problem with this is that once the desktop gets full it gets hard to find what find anything. So, to resolve that problem people organize their desktop icons. And, that works great until the user logs in to a PC with a smaller resolution screen, then all the icons get rearranged. To solve this problem our users found a nice little third party application.

Just in case any one else finds themselves in this same situation, the image is after the jump. 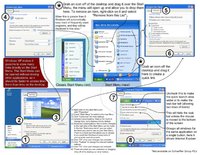