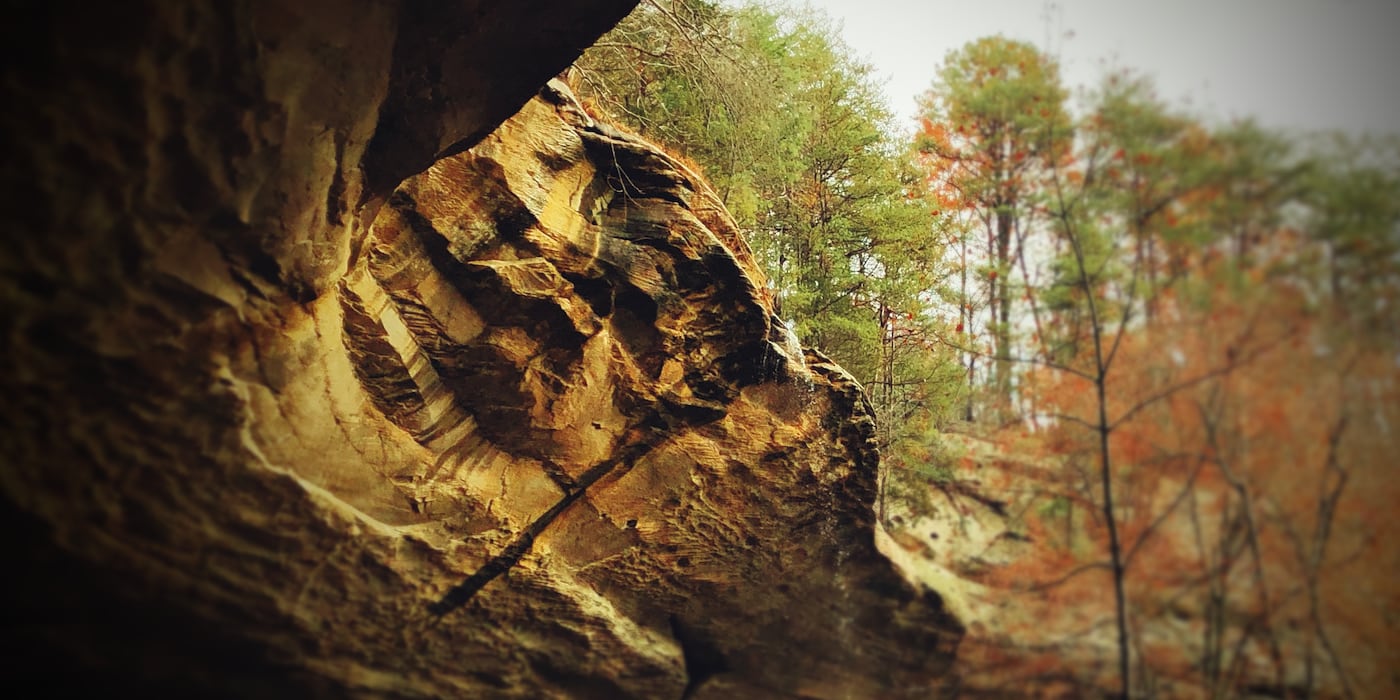 We decided to spend Saturday in the Muir Valley. Like our first trip, we went to Bruise Brothers to stay out of the rain. We got there early and were able to warm up on the right side of the middle wall. We started with CH4 and A-Beano. Then we moved on to The Offering, which is a very fun 5.7.

Rain showers started as we climbed. As we expected, we stayed nice and dry at Bruise Brothers. But, we quickly grew bored with the 5.8 and 5.7s. We walked to the right wall at Bruise Brothers. It was also very dry, but completely full. We could wait for a turn, but it was supposed to start raining much harder. We knew no one would want to leave their dry routes once it started pouring, and we didn’t want to be hiking in the rain. So, we headed toward our alternate crags.

Tectonic Wall and Johnn’s Wall were both supposed to stay dry. And they are near each other, so we headed that direction. As we reached Tectonic Wall there was a group heading out and one group climbing, so we decided we would stay. Doug was eager to get on a 5.10, so he started with Plate Tectonics.

The climbers who were there already had attempted Tall Cool One, but were forced to bail. The climber can stay dry on parts of Tall Cool One, but the belayer and the rope coil do not. The wall also gets wet in areas. Since it was only sprinkling and the route was just a 5.9, we decided to give it a shot. The climb was a little more challenging than expected due to the weepy ares. When a thunderstorm started rolling through, we bailed. We coiled the rope out of the rain and headed to a small overhung area nearby to wait out the storm.

After the storm passed we went back to finish Tall Cool One, but it was soaked and miserably cold by then. I got to the other climbers’ bail biner and cleared the rest of the gear off. The main wall at Tectonics was dry, and there was a small area of dry ground to belay from, so we decided to focus on those routes. I belayed Mark up Gettin’ Lucky in Kentucky while Doug belayed the others up Plate Tectonics. Besides for Doug and Mark, 5.10a is probably our current limit. And with wet and muddy climbing shoes, we were having trouble even getting on Plate Tectonics. Fortunately Doug was able to clean it before the sun started to set.

The weather for Sunday was forecast to be much nicer. However, it had rained all through the night. So, despite getting up early, we were in no hurry to get on the wall. After getting breakfast and breaking down our tents we headed to Pendergrass-Murray Recreational Preserve, or PMRP. The last time Doug, Mark, and I were there we really enjoyed 27 Years of Climbing, so The Gallery was going to be our first stop.

We were the second group in, so we geared up for 27 Years of Climbing. Doug and Mark went first. When they finished they headed over to A Brief History of Climb. As it warmed up, the wall became busier and busier. We all made it up 27 Years of Climbing, but only half of us got on A Brief History of Climb. It’s a 5.10b, so it would have been a challenge for me. I didn’t want to be making a project there while so many others were waiting on this classic.

By this time it was afternoon. We headed over to Left Field, which is a lower-key area that gets afternoon sun. Matt, Kenny, and I started working on Jet Lag while Doug and Mark started Thru Space and Time. Shortly after talking to a group passing through who told us how their buddy broke his ankle on Jet Lag, we bailed on it. We headed to Lowered Expectations to finish our trip with an easy lead. Doug and Mark cleaned Thru Space and Time (and Jet Lag) before meeting back up with us. We packed up our gear and prepared to make the six hour journey back to Northeastern Ohio.

The cave at the end of The Gallery

The cave at the end of The Gallery 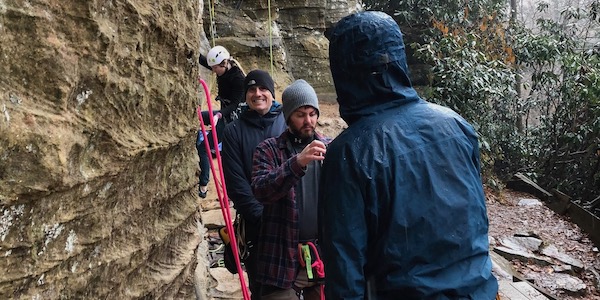 Setting up for Plate Tectonics

Setting up for Plate Tectonics 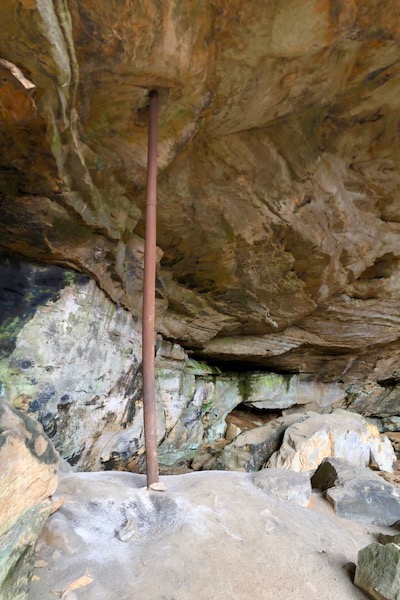 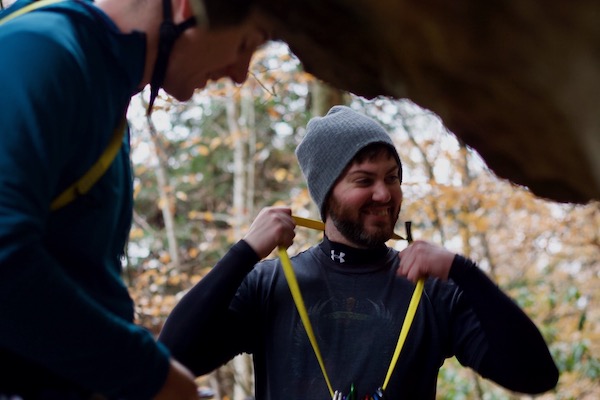 Kenny getting ready to warm up with CH4

Kenny getting ready to warm up with CH4 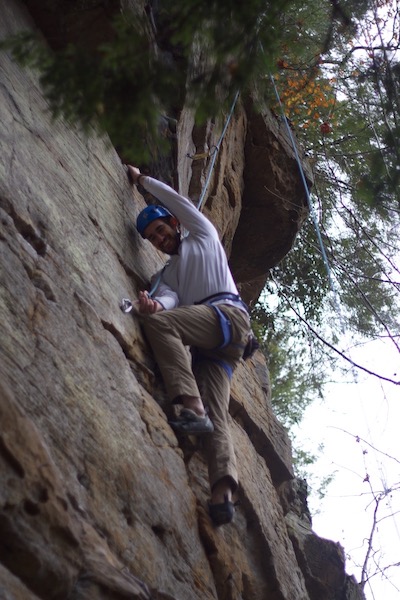 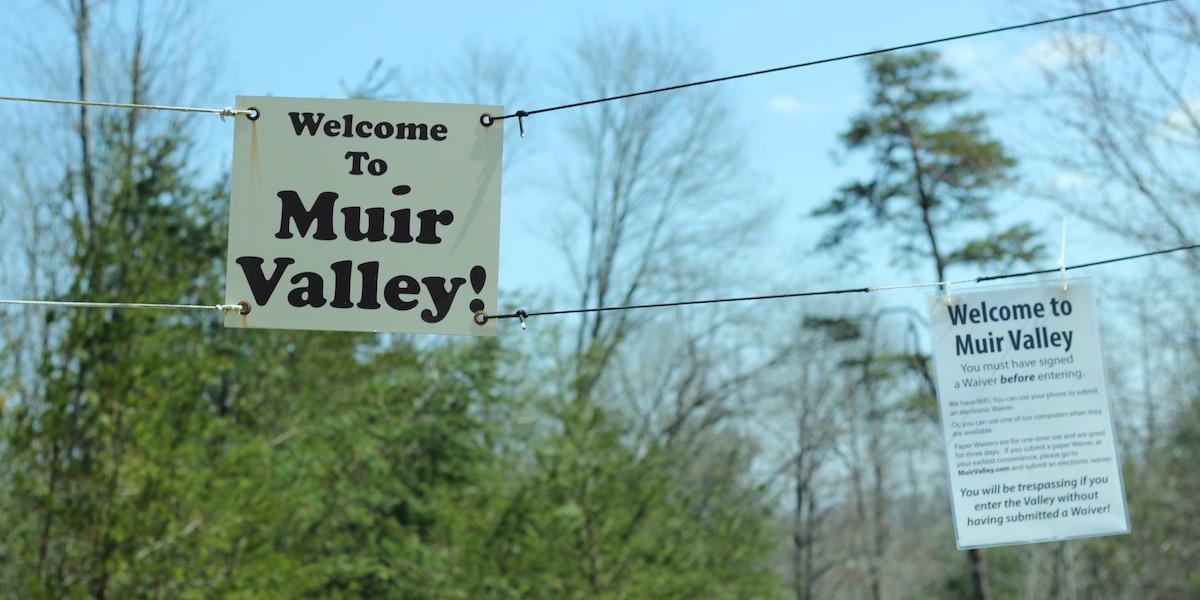