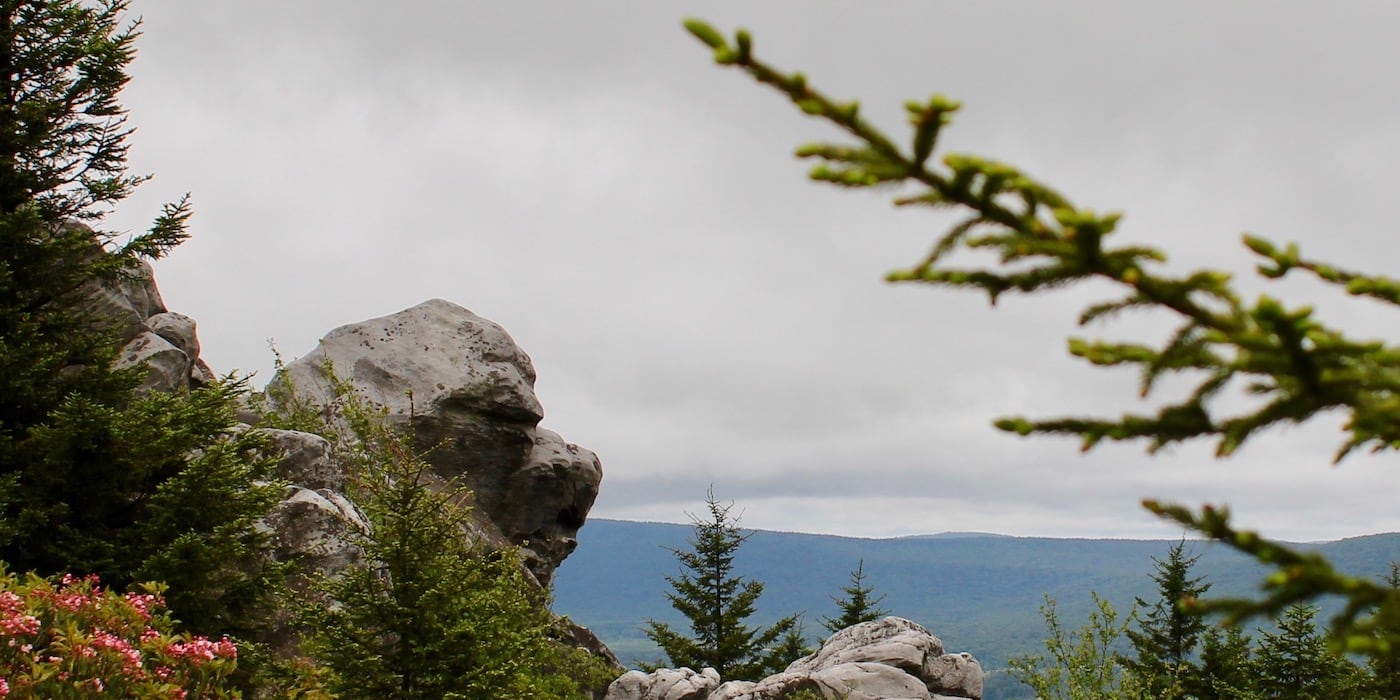 Since the 1960s efforts have been made to conserve the area. These efforts include multiple cleanup attempts by the federal government. In 1986 the Department of Defense established the Defense Environmental Restoration Program (DERP) to restore areas abused by the US military. Through this program the Army Corps of Engineers has went through Dolly Sods in search of unexploded ordinances. They reportedly found the most shells along the Fisher Spring Run. Blackbird Knob and Cabin Mountain (the Rocky Ridge trail) were the target areas, so perhaps the firing or storage area was along Fisher Spring Run. However, due to the challenging ecology and sheer size of the wilderness, it is likely that there are still unexploded artillery shells on the property. The trailheads have signs posted which warn visitors to the possible dangers.

Though there is a very real danger of coming across unexploded ordinances, that should not dissuade anyone from visiting Dolly Sods. The trails and camping areas have been swept for possible explosives multiple times. And, the challenging terrain which inhibits more exhaustive searches also makes it difficult for visitors to stray off trail. Furthermore, there is only one known case of someone being injured by ordinances in the park. Wallace Dean suffered severe leg injuries when a shell exploded as it was being set down. That happened in 1951, long before there were any efforts to remove hazards. This incident does demonstrate, however, the importance of not picking up unexploded artillery shells.

The name Dolly Sods is derived from the first known settler and the ecology of the land. Johann Dahle, a former German (Hessian) soldier, settled in the area around 1781. In the German language all letter are pronounced, there are no silent letters. So, Dahle would have been pronounced Dolly, thus the Anglicized spelling. Sods, on the other hand, is simply what people in the region called mountain pastures. After Johann’s death in 1847, his ancestors grazed cattle in the high pastures. Thus the area came to be called Dolly Sods.

We started our journey at the Bear Rocks trailhead (TR 522). We knew that there would be no mobile phone service, so we had printed maps which listed the trails and mileages. There are plenty of trail choices, so we decided to choose our route based upon trail and weather conditions. When we reached the Raven Ridge trail (TR 521) we continued west on it. We camped about half a mile short of the Rocky Ridge trail (TR 524). There are many spruce groves along the western-most mile of the Raven Ridge trail. These are great spots to camp when bad weather is expected, which was the case for us. If thunderstorms or other foul weather are not a threat, there are some exposed campsites on Rocky Ridge trail. There is one exposed campsite on the top of the ridge which has a three foot stone wall to serve as a wind break.

The Rocky Ridge trail is aptly named. The northern-most section is easy to follow, but as the vegetation height and boulder sizes increase, the trail can become easy to loose. There are short offshoot trails which lead to various scenic overlooks. Following them increases the chances of loosing the main trail, which is what happened to us. Somewhere along the way there were several paths converging in one area. We choose what originally appeared to be the most well worn, but turned out to be some sort of game trail. Rather than backtracking I turned on my cellphone to use its GPS capabilities. There was no service. Normally this would not be helpful, but I had used AllTrails to download the trail map ahead of time. We found where we were and plotted a straight line back toward the trail. I would not recommend getting off trail. Besides for the risks of coming across unexploded munitions, the forested areas are dense and the rocky ground can be extremely difficult to traverse.

It is also a good idea to fill up on water before heading out on the Rocky Ridge trail as there are no real water sources along the trail. The best we found were small pools of water left in the recesses of rocks. In fact we did not find a water source until we reached the Dobbin Grade trail junction. That water was just a small stream running down the Dobbin Grade trail (TR 526) itself. We decided not to attempt filtering this shallow stream. And, based upon the conditions of the trail – there was a small stream running down the center of it – we decided to find another eastward trail.

We turned to the east on the Harman trail (TR 525) which seemed to be less wet than the Dobbin Grade trail. It may have been comparatively less wet, but it was still plenty wet. Yet there were no sources of water. The first significant source of water was where the Blackbird Knob Trail (TR 511) intersected the Left Fork Red Creek. By the time we reached the creek all of our water bottles were empty. Having spent a couple hours off trail didn’t help our water situation. We stopped for lunch at Left Fork Red Creek and filled up on water. There seemed to be some nice campsites near the creek, but we wanted to make it a little further before stopping for the day.

Rather than following the Blackbird Knob trail all the way back to Forest Road 75, we headed north once we reached the Upper Red Creek trail (TR 509). This may not have been the wisest choice since it meant traveling east along Dobbin Grade; a trail which, by my estimation, runs through a bog. We stopped for water at the intersection of Upper Red Creek and Dobbin Grade. While the water was filtering I decided to walk ahead. We were looking for a place to stop for the day. The trail was moderately wet and muddy, but the sides of the trail seemed to be covered in nice grass. Rather than walk in the mud I decided to walk in the grass, or that’s what I though I would do. As soon as I stepped off the trail I went knee-deep in the bog. Fortunately, I was able to quickly pull my leg out without loosing a shoe. I learned a lesson and stuck strictly to the trails the rest of the way out.

The first chance we had to get off of Dobbin Grade was at the Beaver Dam trail (TR 520). The intersection wasn’t marked, so we had to double-check the location using GPS. We were heading uphill, but the ground was getting less mucky below our feet, so it seemed like a fair trade-off. After two days and two nights we arrived back at forest road 75. A short walk down the road and we were back at the car by 10 in the morning.

Backpacking the Dolly Sods Wilderness was a great change of pace from the usual green tunnel backpacking trails. There are a few things to keep in mind when backpacking there however. First, stay on trail. If the threat of unexploded ordinances isn’t convincing, then perhaps the threat of going waist deep in a bog is. Next, make sure that some sort of GPS-based mapping capabilities are available. The trails are not blazed and signs are only posted at major trail intersections, so there are plenty of opportunities to loose the trail. Also, there is no cell service in the area, so simply pulling up Google maps is not going to be an option. Finally, use waterproof hiking boots if possible. The majority of the trails are wet, and avoiding the wetness is not an option. I almost never wear waterproof hiking shoes; I normally opt for quick drying trail runners. So, I’m used to dealing with wet feet. There seemed to be something about these trails, or the bog water, that tore up my feet more than normal. With this handful of suggestions Dolly Sods can provide a great wilderness experience. 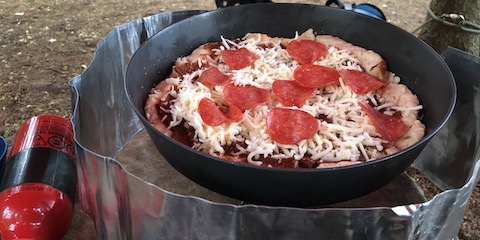 Making pizza for dinner in the fry-bake

Making pizza for dinner in the fry-bake 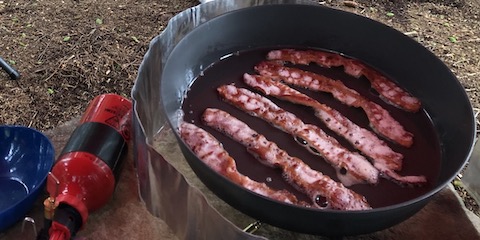 Cooking bacon for breakfast in the fry-bake

Cooking bacon for breakfast in the fry-bake 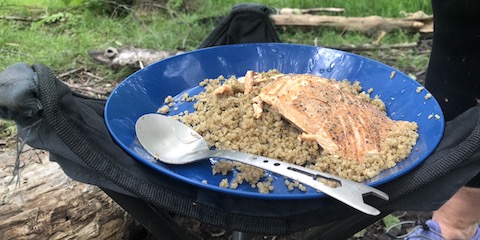 Another delicious dinner of wild pink salmon and quinoa

Another delicious dinner of wild pink salmon and quinoa