To determine where the photographs were taken I first looked for interesting large buildings; ones which would be easier to identify and would be more likely to still be standing. Most of the visible structures are nondescript four or five story buildings. One image shows a stepped building which is at last 20 stories tall. That means the pictures were taken in a fairly large city, but that only narrows it down to around 300 possibilities. Somewhere past the skyscraper was another tall building which steps in drastically near the pointed top. It looked familiar, but I couldn’t place it.

Another frame contained an unusually shaped building with large writing on it. The words seemed to spell ‘Claker Cels’, which doesn’t make sense. Then I realized that the wall on which the words were written was not flat, it was a series of silos. The name on the silos was ‘Quaker Oats’, so I checked if the shaped of the building matched the shape of Quaker Square. It did! The negatives contained old images of Akron, Ohio.

In a way it makes sense that I would find pictures of the closest large city. On the other hand, when these photos were taken film was still relatively expensive, so it might not have been common to take pictures of the city you see everyday. Perhaps the photographer lived far enough away that visiting Akron was novel, but near enough that I would find them over half a century later.

One block north of Central Tower and Quaker Square would place the photographer on Market Street. That means the two remaining city shots which are harder to place were taken looking west and north from the corner of Market and Main. In the westward facing shot the rightward curve of Market Street persists today, but none of the buildings in the foreground do. On the right edge of that photo is the Portage Hotel, which was demolished in 1992.

The northward facing shot is deceiving since Main Street no longer continues on across the Little Cuyahoga River valley. The North Hill Viaduct that connected Main Street to Cuyahoga Falls was demolished in the late 1970s and latter replaced by the All-American Bridge. The Portage Hotel is visible on the left side of this photograph, while the Everett and Ohio Edison Buildings can be seen on the right.

I first thought that the photographer must have been on top of the long ago demolished Howe Hotel. But the shots of Market street suggest they were directly on the northeast corner of Main and Market. That places them on the top of the United Building. The building at 1 South Main Street is now a hotel, but the building was historically used as office space, so it’s not clear how the person taking these photos came to be on top of it. Maybe determining when the photos were taken would provide insight.

To date the negatives I started by inspecting the film itself. The film was marked with EASTMAN ⠘❘ ❘⠆ SUPER XX SAFETY▲ FILM. I could not find much information on this film, but it seems to have been available between 1940 and 1954. Perhaps there is an archive in Rochester which contains old Eastman paperwork, and there I could learn the meaning of the negative’s codes. But, for now, I would need to find clues in the pictures to narrow down the date of the photos.

One image shows a man next to a car. The car appears to have protruding rear wheel wells and flush front wheel wells, which suggest that the car is a late 1940s to early 1950s model. It has a fastback, but the lights are too round for it to be a Chevrolet Fleetline. The extra upper rear bumper suggests that it could be a Pontiac Streamliner, and the round lights would make it a 1950. Pictures show the Odd Fellows Temple prior to the removal of its top floors. That modification happened toward the end of 1951. So, the pictures must have been taken sometime between 1950 and 1951. Based upon the leaves in the trees and how people are dressed, I would think it was late spring or early summer. So, my best guess is that these photographs were taken in the early summer of 1951.

I was thrilled to learn that I had found some photographs of Akron taken back when it was still growing. But I still wondered about the photographer. Who were they? Were they in any of the photos? What brought them to Akron? How did they come to be on the top of the United building? Who were the people on the building, or in the auto museum; they seemed to be different groups, did they all now each other? What happened to the camera to cause flare seen in so all of the negatives? But, there is almost no chance of discovering the answers to these questions.

Thanks to help from others who are interested in Akron history I found out a little more about this set of negatives. The photos below which show people at a car museum were taken at the Crawford Auto-Aviation Museum. At the time the photos were taken the museum was located on East 30th and Chester Avenue in Cleveland, it is now part of the Western Reserve Historical Society.

More Photos from the Roll 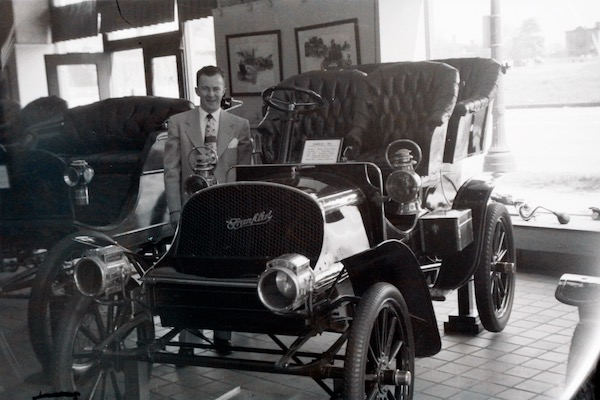 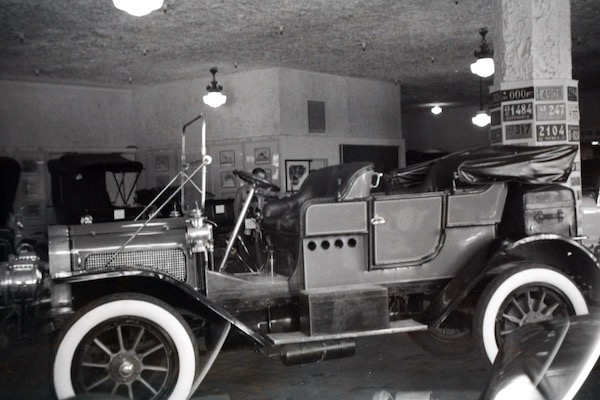 An early automobile at the original Crawford Auto-Aviation Museum

An early automobile at the original Crawford Auto-Aviation Museum 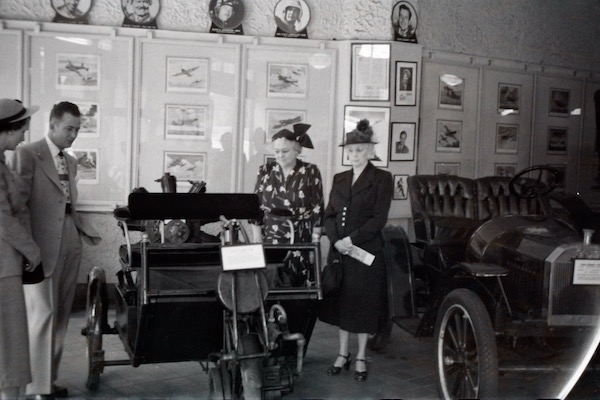 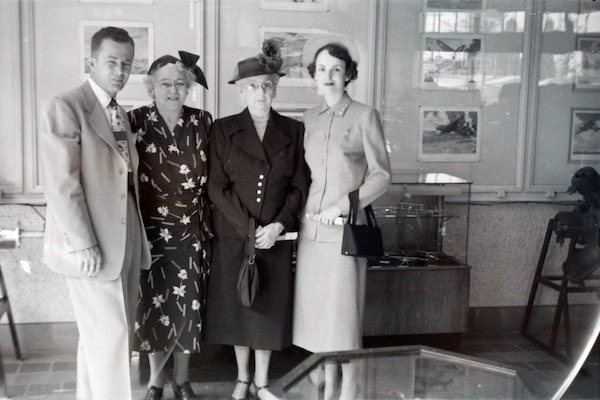 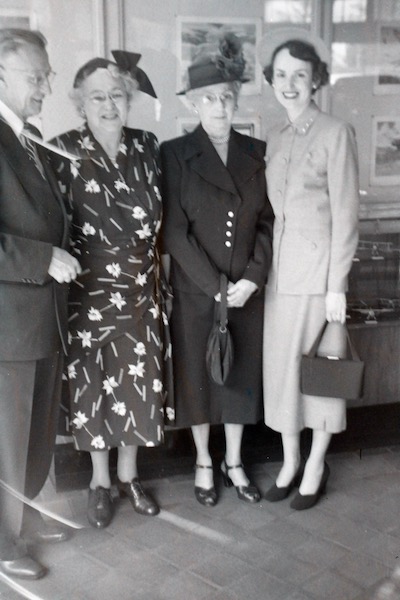 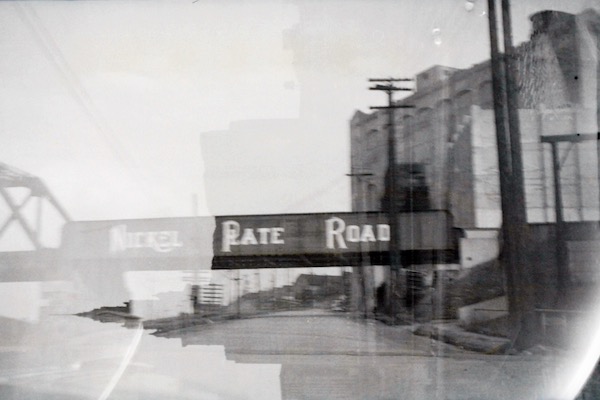 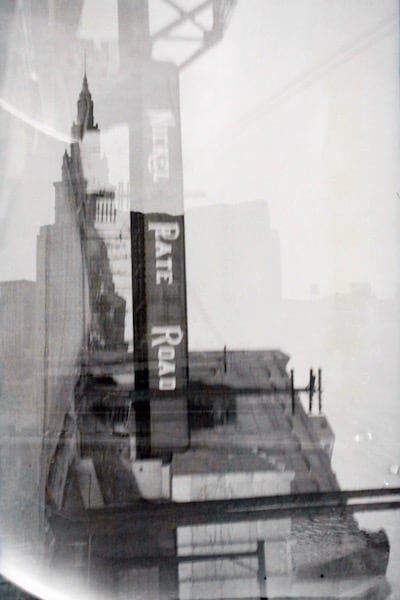 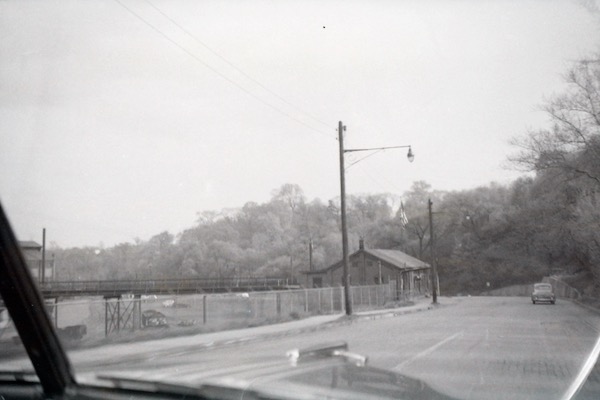 On the road to somewhere

On the road to somewhere 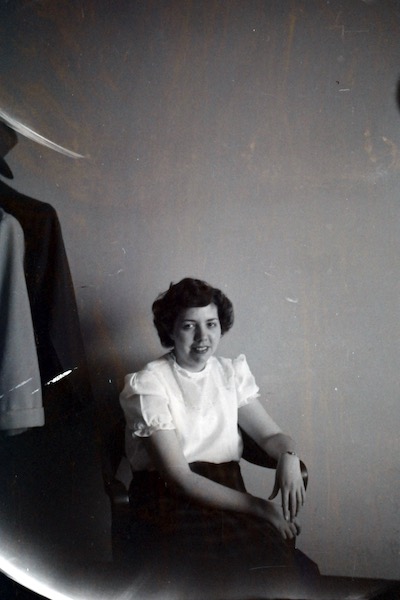 Woman near the coat closet

Woman near the coat closet 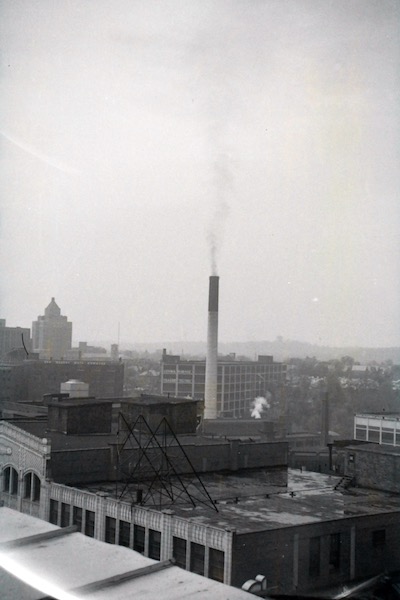 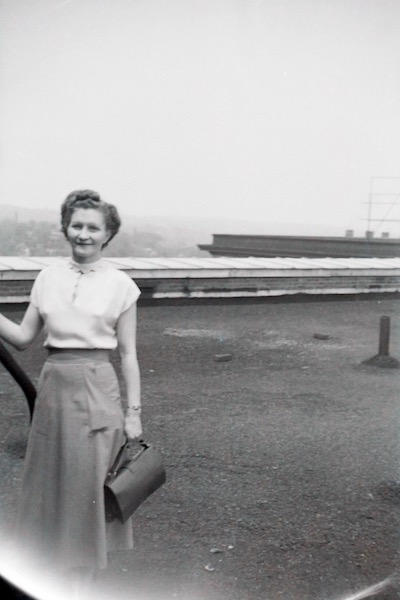 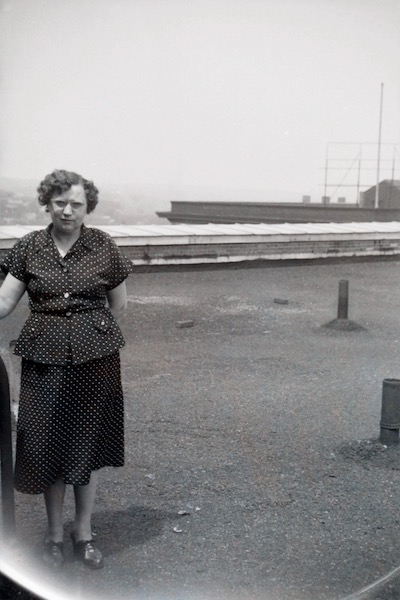 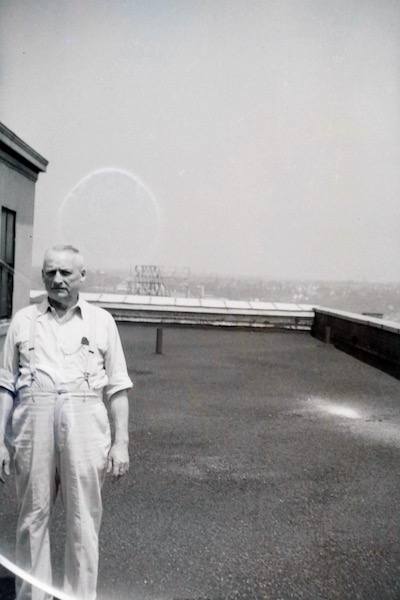 A man on top of the United Building

A man on top of the United Building 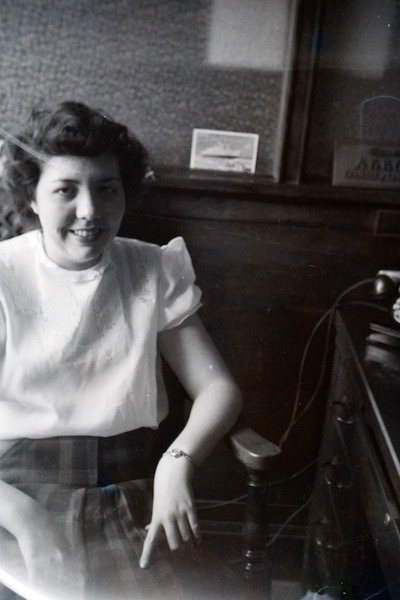 A woman sitting near the phone

A woman sitting near the phone