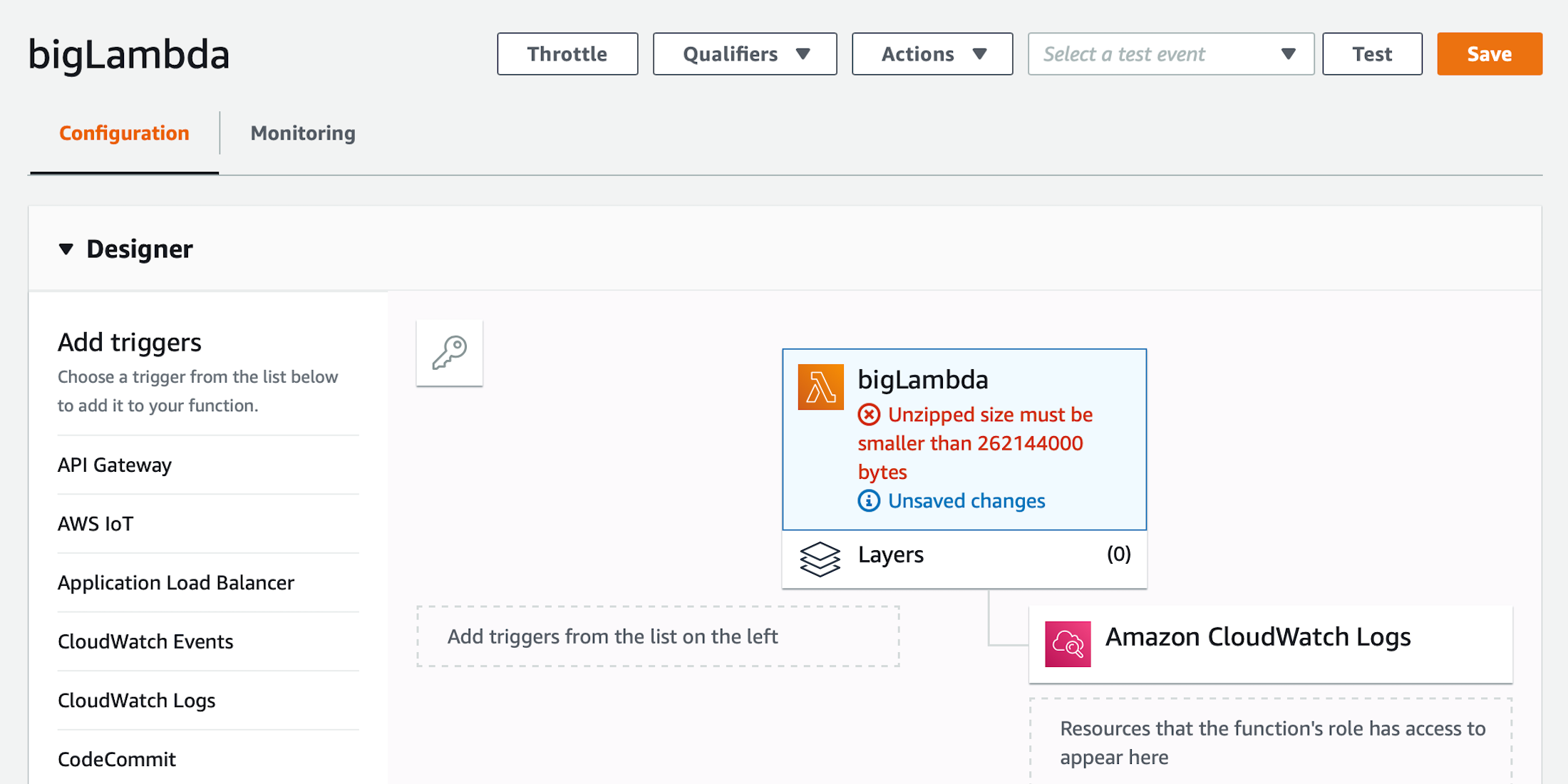 The zipped up package file was over 68MB, so it wasn’t possible to upload it using the web interface. The error tells us, “The selected file is too large or is not an accepted file type. The maximum size is 50.0MB.” No problem, the web interface gives us the option to get a file from S3, and the error message reinforces that we should do that for all packages larger than 10MB. We switch over to S3, create a bucket, and attempt to upload the package. Uploading the file to S3 via the web interface also results in an error – “100% Failed.”

Fortunately, that problem can be worked around by using the AWS command line tools.

Despite working around the zipped file size problem, we quickly find that there is also a maximum uncompressed size as well. The error messages tells us, “Unzipped size must be smaller than 262144000 bytes.”

Ok, what if we remove scikit-learn from the package. We will still need the dependencies, but perhaps we can create a new base layer which contains the required libraries. I created a layer which contained the python machine learning libraries. Then I removed them from the package, re-compressed it, and uploaded it to S3. The result was the same. The uncompressed size of all layers cannot be more than the 262MB maximum which we ran in to earlier.

I nearly gave up at this point. As a last ditch effort I decided to see if a deployment tool could help me overcome the problems I was encountering. I tried the Serverless Framework. I got everything set up by using the following commands.

I had to change the default serverless configuration file. First, I added slim:true, but for some reason that made my zipped package larger. The uncompressed package was still larger than the maximum. Next, I found the zip option. It seems that adding zip:true causes the Python dependencies to be zipped inside of the package. So, even when the package is uncompressed, the dependencies are still compressed. Now, given the serverless.yml shown below, running the serverless deploy command in the big_lambda directory was finally successful!

There is still a problem however. If the lambda is tested it will still not run properly, it is missing its dependencies. They are still compressed. The Python script must be modified to contain the following snippet. It should be near the very top of the file, right before the import statements. This will uncompress the requirements after the Lambda instance is running and there is more disk space available.

With that, we have likely pushed AWS Lambda to its limits. If you attempt all of these steps and still cannot run your package, then it is probably time to move on to a more robust solution.