I wanted to know if it would be more efficient, when searching for both a minimum and a maximum value in a list, to perform both tests in a single loop rather than making calls to both the min function and the the max function. The basis for this question was that if the min and max functions ran in O(n) time then, all else being equal, combining them into a single step should cut processing time in half. Apparently, all else is not equal; running both the min and max functions is faster than looping over all of the values once. The detailed results are listed below.

Test then Deploy an Ember App from Jenkins

Here is a quick example of how to configure Jenkins to test an Ember application and then deploy it to AWS S3 if all of the tests pass.

The first step is to create a project within Jenkins to test the app. To execute the tests the following shell commands will be executed:

The important part it to build other projects, but only if this build is stable (i.e. the tests pass).

Here is the Jenkins configuration for the test project:

I know the title has a high buzzword quotient, but I assure you it is a real thing. The use case is this: there is code stored on GitHub which, after it passes all tests, will be deployed to Elastic Beanstalk inside of Docker container. For this project CodePipeline will get the source from GitHub and send it to Jenkins for testing. If the tests pass then CodePipeline will publish the app to Elastic Beanstalk. Below are the steps required to get this up and running.

Installing Jenkins and Docker in an AWS EC2 Instance

In order to do efficient, modern software development, especially for web applications, it is absolutely necessary to have a system for continuous integration (CI) and continuous delivery (CD). The idea with CI is to continuously integrate working code to the repository so that it can continuously be checked for errors. So, a prerequisite is to be using some sort of test driven development (TDD) method or at least some unit test framework; otherwise there is chance to automatically test for errors when the code is committed to the repository. The best CI systems automate everything after the commit. A developer pushes her code, then the CI systems notices the change and automatically runs the tests. When the application passes all of its test, a continuous delivery system should then automatically put the code into the QA, staging, or testing environment. There can be a lot of steps required to get a decent CI/CD system working, and it can be especially daunting when there is no dedicated DevOps team. So, I created a cheat-sheet for quickly setting up a simple Jenkins CI/CD system on an AWS EC2 instance.

Before proceeding you must have an Amazon Web Services account and be somewhat familiar with AWS. 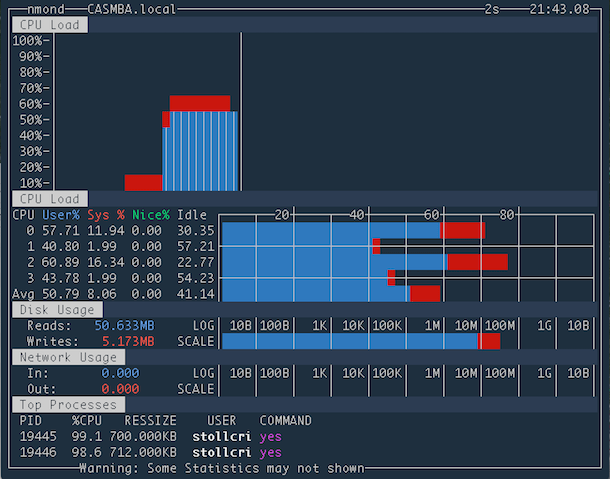 Nmond is a Ncurses based system performance monitor for Darwin (Mac OS X terminal) written in pure C. It was “forked” from nmon. The original nmon gathered system statistics by looking at /proc, which is not available on Darwin, so system calls had to be implemented for all the statistics. The original program was monolithic and used global state a lot; it was modularized during the rewrite. It’s still a work in progress.

Most people would not understand why anyone would even have a preference on how many spaces a text file should be indented, but for people who interact with text files all day this can be a big deal. Seriously. People like to feel comfortable in their work places, and for software developers, or coders, their work place is their source files. Consider this analogy. It should not matter which side of my desk the phone is on, yet I prefer to have my phone on the left. The reason for my preference is that I often need to use my mouse while I am on the phone, so it is more convinient for me to reach over with my left hand and pick up the phone while leaving my right had free. I would expect a leftie to have the exact opposite preference.

So, Apple has just released a new programming language called Swift, and naturally I wanted to check it out. I started by writing example programs in the playground as I read through the Swift iBook. That was fun and all, but I wanted to compile something and create an actual program. Apple said that Swift was fast, so I also wanted to benchmark it against C, which is my de facto point of reference for fast. I recently wrote a post where I compared minimum functions in C, so I though it should be trivial to port that code to Swift and test it out. The porting was easy, and the functions ran about 20 times slower than the C equivalents (which is actually not bad, in almost all cases it’s a good trade-off to decrease development time), but I found something else that surprised me. The built-in min function was insanely slower than the ones I hand coded. Whereas the test function using my hand-coded min3a() function took, on average, 3446 microsecond in C and 68,085 microseconds in Swift, the test function using the built-in min() function took 16.87 seconds to run.

Anyone who has written C code has probably at one point or another had to write a small function to find the minimum value in a set of integers. When the set contains only two numbers, a macro like #define min(a,b) ((a) < (b) ? (a) : (b)) is frequently used. When the set is expanded to three it is possible to add to that macro, but I generally prefer to err on the side of code readability whenever possible, so I just write a little function to do it. Recently, as I was performing research for my master’s thesis, I saw some C++ code which implemented the minimum_of_three function slightly differently than my standard naïve approach. The comment said something to the effect of, “spend a register to reduce the number of branches and increase performance.” I’m always looking for ways to improve my code, so I thought that I would try out this better way. However, I am not one to just blindly believe stuff I read in code comments, so I had to test it out for myself. Below are the results of my analysis.